It was somewhat chilly last night in St Agnes but this didn’t seem to dampen spirits! Again our evening was based around some of the readings for Sunday, taken from the A and B materials and also looking at a theme; this week was hope.

We began with a clip from youtube of an experiment where children are given a marshmallow and told they can eat it now or wait and get another one later. While we watched we held sweets in our own hands. Waiting can be very difficult, however sometimes it is worth it!

This led on to thinking about the people of Israel and Judah when they were in exile. The children listened to this re-telling of the reading from the prophet Baruch (We used cloths of different colours- black, purple, white and gold to help tell the story):

For years the People of Israel and Judah had turned their backs on God. They did not show him their faces. They did evil in every place in the land. In the end God had had enough. Armies amassed on the boarder and took both lands.

The invaders took many, many of the Israelites and took them back to their own country far away. The people had to say goodbye to their lands, the villages where they grew up, their friends, their families.

I wonder how they felt? (Place black cloth, for mourning around the shoulders of some children)

They remembered God’s promise to send his promised king to bring them back home.

The people of Israel missed their land, their home, the people they had left behind.

But they had work to do. They worked as servants doing every kind of work. They carried their sadness with them when they worked, ate, slept. And they waited. (Advent’s colour is purple is a colour of waiting, of getting ready, of saying sorry- Lay the purple cloth over someone)

As they waited they remembered God’s promise to send his promised king to bring them back home.

To these sad people God sent his messengers, the prophets to help them remember God’s promise to send his promised king to bring them back home.

I wonder what they felt like hearing the words spoken by Baruch?

Take off your clothes of sorrow, of mourning, of waiting (Remove black/purple cloths)

Put on clothes of celebration, of forgiveness, of joy! (The churches colours for celebration are white and gold put these on the children)

Get up, let everyone see you. God is bringing you back home. You will come home to find goodness and faithfulness, peace and acting rightly. (All the things many of them hadn’t been doing)

You were dragged away by soldiers; you will come back like royalty. God is bringing you back home.

God will lead you home. When he finds a valley with steep sides, he will fill it in, just to bring you home.

God will lead you home. On the journey you will be kept safe. God will give you forests to shade you from the sun just to bring you home.

I wonder what it felt like to hear those words, the words of God’s prophet, telling God’s promise to these people far from home, in sadness and sorrow?

God was sending a King who would lead them back home.

Now prophets’ messages come true in lots of ways. The people did, after many years return to their physical land of Israel. This was where Jesus was born many years later. The promise of God’s King lived on. That part of the promise came true when God himself came as a little baby born in a stable. And our King takes us back home. Listen to what the catechism says about hope:

Hope is the power by which we firmly and constantly long for what we were placed on Earth to do: to praise God and to serve him; we long for our true happiness, which is finding our fulfilment in God;
and we long for our final home: in God

Hope is trusting in what God has promised us in creation, in the prophets, but especially in Jesus Christ, even though we do not yet see it. God’s Holy Spirit is given to us so that we can patiently hope for the Truth. (Adapted from YOUCAT)

A reason to put on our best clothes. Even when we feel far away, God is bringing us home.”

After this we split into two groups to do activities linked to the idea of preparing a way for the Messiah, which is in the Gospel reading this Sunday. The older children thought about the things in us which stop us being ready for God; the things that stop God bringing something to birth in us this Advent.

The younger children thought about all the things we do at Advent that help us prepare for God’s coming in Jesus Christ. Two of these were preparing for their first Reconcilliation and it gave us a good opportunity to talk about confession.

When we joined back together the older children placed all the stones on the prayer focus at the front. The children read out all the things that they had thought of that get in the way.

After that we shared the things that we do during Advent to help us prepare. We moved the stone to the side and places the pictures the children had done down to form a “straight road”, one that was clear of obstacles. As the Gospel tells us “Prepare a way for the Lord, make his paths straight.” 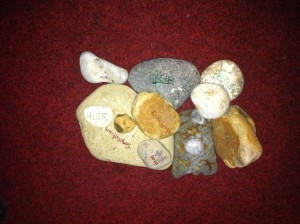