I was very cold by the time our walking tour group arrived at the Neue Wache. It has had various purposes but now houses  a sculpture by artist Kathe Kollwitz called “Mother with her dead son.” A woman, wearing simple clothes cradles her son’s lifeless body. Her face is partly hidden, his obscured by her arm wrapped around it. Her left hand gently holds his fingers.   It is a poignant and moving piece. It contains in it such sorrow, sorrow experienced by so many over history and so many who have over the years called Berlin home. 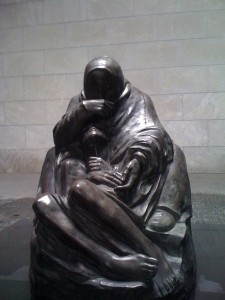 At the end of the walking tour, I walked back past the Neue Wache and across the road to St Hedwig’s Cathedral. In a small side chapel I sat in front of a more traditional Pieta to collect my thoughts. 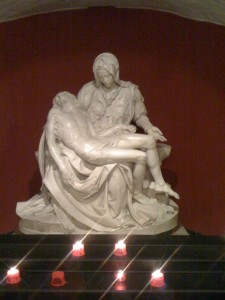 It seemed to me then that they were the same. A mother cradling her son’s body, wrung out and devastated. I often wonder whether Mary heard Simeon’s words again as she sat at the foot of the cross with the body of her son being passed down to her.

Two images of mothers, standing for all mothers. Two images of sons, standing for all who were victims of war or injustice or hatred. In the Incarnation God enters our world and stands as a victim along side all who are victims. He hands himself over into the hands of those he created and they torture and execute him.  Thinking about these two sculptures, these two pietas, I see how God had been the innocent victim, stripped, beaten and murdered.  This is what God did in the face of great evil. He entered the place where he to would become a victim. His answer was to be one of those innocent victims and his mother cradled his dead body in her arms, like so many other mothers.

And Jesus’ father and mother marvelled at what was said about him; and Simeon blessed them and said to Mary his mother, “Behold, this child is set for the fall and rising of many in Israel, and for a sign that is spoken against (and a sword will pierce through your own soul also), that thoughts out of many hearts may be revealed.”
2013BerlinGood FridayIncarnationLentNeue WachePieta