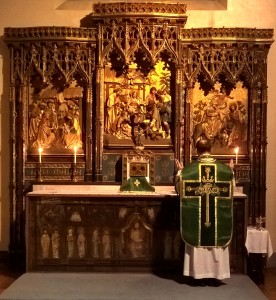 After Communion on the Monday after the Baptism of Christ

In the light of my own priestly formation, and the publication of the Ordinariate missal, can the eastward celebration of mass be justified?

Let’s be clear that despite what many think Vatican II didn’t rule out eastward facing celebrations of the mass. It is true that the question was raised as to whether facing East alienated the people and engenders a sort of clericalism — a danger to be avoided. Yet most of the Vatican II documents still assumed that mass celebrated facing the people would be the exception rather than the rule. The general instructions of the ‘Missals’, since Vatican II, also assume that mass would be celebrated Eastwards. I make this point not to denigrate mass celebrated facing the people, with its emphasis on imminent theology, God appearing in the midst of us, but to highlight the legitimate celebration of the mass facing Eastwards, with it emphasis on transcended cosmic theology, in which we ascend to the worship of heaven.

When the priest offers Mass facing eastwards, he is not turning his back on the people to exclude them. Rather he faces the same direction as the people, because he and the people together are offering worship and sacrifice to God. As a Christian community, all are facing ad orientem (i.e. toward the east) waiting in joyful expectation for the coming of our Lord Jesus Christ who will return to judge the living and the dead. The priest also offers Mass in Christ’s name and in His Person, in persona Christi (where the identity if the particular priest is unimportant), to God the Father (listen carefully to the words of the mass and note how much is addressed to God the Father), and is leading his people in adoration and worship. He is facing east, the rising sun, which is symbolic of the ‘New Jerusalem’ and he is leading his flock as the Good Shepherd does.

The position of the priest then was not meant to separate the clergy from laity. Rather, it has more to do with the understanding of the Cosmic Liturgy. In early Christianity, all Churches were “oriented” toward the east, meaning that if you were sitting in the pews as a parishioner facing the altar, you would be pointing east. The rising of the Sun was seen in the early Church as a powerful symbol of the rising of the Son, Jesus Christ, from the tomb (ergo, the importance of a “Sunrise Service” on Easter Sunday). In light of this, (no pun intended) the priest and people would face east to symbolically “orient” their prayers to the risen Christ, not seeing the Sun as a god, but allowing the Sun to be a powerful symbol of the risen Christ.

To quote St. Augustine: “When we rise to pray, we turn east, where heaven begins. And we do this not because God is there, as if He had moved away from the other directions on earth…, but rather to help us remember to turn our mind towards a higher order, that is, to God.”