Tomorrow is the funeral of Mgr Edwin Barnes, at St Osmund’s in Salisbury. As some of us have just been away in Bournemouth we were able to chat with some of his old group, who are travelling up. For those unable to be there in person, the service will be live streamed at the church’s live stream

A few years ago we had another group time away, this time in the New Forest. Mgr Edwin came to visit us during that week and gave two talks during the day. One was on the peace during mass. The shifting of the position of the Peace, from our Anglican days, was something that some of us were finding challenging. Although Mgr Edwin made a point of saying that he knew very little about it, it was obvious that he had looked in much depth into the subject and it was a significant moment for many of us.

Edwin managed to hold together both an image of the elder statesman for the Ordinariate and well as a grandfatherly figure for many individuals. May he hear the words of Our Lord, “Well done, good and faithful servant.” 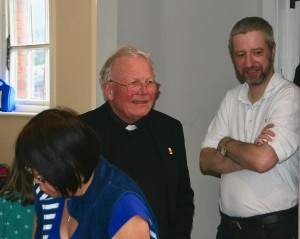