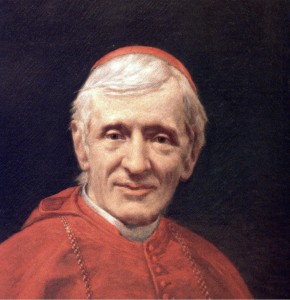 Blessed John Henry Newman (1801–1890) will be canonised by Pope Francis on Sunday 13 October. It’s a big day for the Ordinariate in the UK because the Ordinariate was placed under his patronage when it was founded. The arms the Ordinariate has adopted feature his coat of arms marshalled with the cross and fleurs-de-lys of Walsingham. He is the most important and notable example of a member of the Church of England joining the Catholic Church.

Born in 1801, he grew up in a Church of England family and went to school in Ealing until his intellect led him to Trinity College Oxford at the age of only sixteen. He was a studious, rather serious young man whose shyness held him back from forging many friendships. He was ordained an Anglican priest in 1825 and was a popular preacher.

As a Fellow of Oriel College, he was an important founder of the ‘Oxford Movement’ in the 1830’s. The rediscovery of Catholic doctrines and practices met hostility in the Church of England, and Newman’s scholarly researches led him towards the Catholic Church. In 1845, after many years of soul-searching, John Henry Newman decided to become a Catholic. He was ordained a Catholic priest in 1847 and three years later founded the first (if shortlived) Catholic University in Ireland. He introduced the Congregation of the Oratory into England, being based at the Birmingham Oratory for the rest of his life.

Newman played an important part in the First Vatican Council (1869–70). His key ideas included the development of doctrine — developed over generations, and he believed that this was at the heart of faith. Often misunderstood by his contemporaries, Newman’s ideas created suspicion among many Catholics at the time, but Pope Leo XIII recognised his orthodoxy, and in 1879 created Newman Cardinal Deacon of St George in Velabro.

The Oratories of England have a fuller biography available if you want to know more; and what Popes have said about him.

In Eastbourne we’re joining in the celebrations, and even if you’re not in Eastbourne you can too.

Novena of Prayer in preparation

A Novena, nine days of prayerful preparation for the canonisation, starts on Friday 4 October and ends on Saturday 12. We’ll be posting here daily and if you follow our Twitter account you’ll get reminded to join in. However, if you need to print a paper copy there’s also a leaflet available using the material published by the Oratories of England — we’ve condensed it on to a single sheet.

This is expected to be available to stream online from 8:30am (UK time, BST) via EWTN Europe.