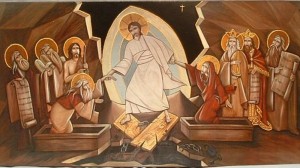 This Sunday the Church, in her wisdom, has shifted the focus of our readings at mass. Obviously the Gospels reflect the resurrection accounts. However that which, through the rest of the year, are readings from the Old Testament, gives way through the fifty days of Easter to the account of the Early Church in the Acts of the Apostles. Our second readings also move from the letters of Paul to those of both Peter and John.

Reading from the Acts of the Apostles is not surprising, as we follow the emergence of the Church with its trials, tribulations and triumphs, after the Resurrection and Ascension of our Lord.

Peter and John are central players during Holy Week and the resurrection accounts of the Lord. In their epistles we get an insight to their reflections of what they heard, saw and gave their lives to.

Today we hear from Peter’s opening words of his first Epistle. Peter wastes no time in getting straight to the point. The resurrection of Our Lord has given us a new birth and entry into a new creation that is imperishable, undefiled and unfading. This new creation is eternal as opposed to the corrupted, temporal world that will come to an end.

This is not to despise the temporal world, which is given by God. However, one mark of the Fall is the great temptation to see worldly things as a means and an end in themselves, ignoring the hand from which they came. Those who invest their sense of meaning and hope in that which comes to an end will have their hopes die with it.

How often have we seen humanity define the worth, meaning and value of themselves and others by their ancestry, social status, wealth, poverty, popularity and honour? How often have we lifted upon a pedestal or dehumanised because of these false values? Human history is littered with the terrible consequences of such tragic folly.

The world and our lives are beautiful and a gift from God — but not something which we should grasp hold of or invest our everlasting hope in. Faith, our trusting in the promises of God in Christ, made manifest in his resurrection, will be revealed in their fullness at the end of time, Peter assures us.

In the opening two verses of his epistles, Peter reflects that those who have responded to the Gospel have a sense of being called, set apart, of being sanctified in the spirit and sprinkled with Christ’s blood. Peter is making clear that the death and resurrection of the Lord are inseparable. It is also this calling to participate in Christ’s death and resurrection that redefines the sense of the value of the faithful which provides eternal meaning.

This is fundamentally important to the community his epistle addresses, and consequently to the Church as a whole. This community were facing persecution, suffering and the knowledge that things of this world can be so easily lost or taken away. Peter writes to remind them of where their ultimate security lies: in entering into the death and resurrection of Christ, which leads to eternal life.

Isn’t it strange that our modern self-confidence and sense of control and knowledge of all things has been shaken and humbled by a tiny virus? Our old certainties have given way to doubt, worry and a real sense of loss. Death which we so often seek to avoid, which we ignore or pretend isn’t there has, in this present crisis, demanded to be acknowledged.

We have been made more aware of the fragility of our lives and that any one of us could die. The question of what we build our hope on becomes more urgent and demanding.

It is difficult not to mention Paul who himself states (1 Cor 15:19) “If for this life only we have hoped in Christ, we are of all men most to be pitied.”

Christ has, however, been raised from the dead and the gospel in dramatic fashion leaves us in no doubt that this is not a hope based on delusions, fanciful or wishful thinking, but a concrete reality. That concrete reality, in sacramental terms, is made present to us, body, soul and divinity in the celebration of the mass.

It is resting more fully in this promise, and this foretaste of what is to be, that enabled Peter and those he wrote to to “rejoice with unutterable and exalted joy,” and this despite the suffering they were going through.

It is the very fact that as St Augustine famously put, “we are an Easter people and Alleluia is our song,” that enables us even in this time of crisis to exult with unutterable joy.