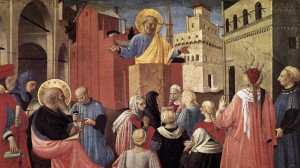 “Always be prepared to make a defence to any one who calls you to account, for the hope that is in you.”

Peter is probably writing his letter from Rome. It is most likely that he was under house arrest and it is in Rome, under Nero, that he will be martyred.

A great theme in his letter is about how to deal with the suffering and persecution that the church is experiencing. He is speaking not from theological knowledge alone but a real lived out experience.

In our passage from his epistle today, he is tying together three strands: our bearing witness to the hope that is within us; the manner of that witness and suffering for the faith. This is the seed bed for a developed theology of Martyrdom in later Christendom.

Throughout the New Testament the word martyr carried the meaning of one who bears witness to the Lord. Hence Peter’s exaltation to his readers: ‘give an account of the hope that is in you’. In the light of Christ’s resurrection and after the day of Pentecost, the Holy Spirit drove the Apostles and first Christians to proclaim the Good News of the Lord’s triumph over sin and death.

This proclamation was accompanied by great oratory and miraculous signs of healing. Yet just as our Lord himself spoke and healed he was also rejected and crucified. A genuine proclamation of the Gospel, the truth of Christ, therefore is also marked by great joy, rejection and persecution.

Peter is making the connection that suffering for the faith is also an opportunity to witness to Christ. That witness however is as effective as the manner in which we face the trials before us. He has already said, earlier in his epistle, that our suffering must not be because we are justly being punished for wrong doing — we cannot expect any great reward for that. It is the manner our of conduct for unjust suffering that will ‘shame those who revile us’ and give credence to our witness to Christ.

Do not return evil for evil or reviling for reviling; but on the contrary bless, for to this you have been called, that you may obtain a blessing. For “He that would love life and see good days, let him keep his tongue from evil and his lips from speaking guile; let him turn away from evil and do right; let him seek peace and pursue it. For the eyes of the Lord are upon the righteous, and his ears are open to their prayer. But the face of the Lord is against those that do evil.”

In our post-Christian country, to stand out for the faith is often to invite mocking ridicule and criticism. How tempting it is to mock and ridicule in return? But to do so is to mar our witness to Christ who: ‘…was oppressed, and he was afflicted, yet he opened not his mouth; like a lamb that is led to the slaughter, and like a sheep that before its shearers is silent, so he opened not his mouth,’ (Isaiah 53:7).

Peter quotes Psalm 34, telling us to seek peace and pursue it. It is a peace that is found only in the knowledge that our citizenship is not here on earth, but in eternal heavenly glory. The more we are able to grasp this reality, to fix our eyes on the beatific vision of our Lord, the more we are able to hold worldly concerns lightly.

The saints and martyrs are those who have been captured by this divine glory of the Lord, where their hearts were truly fixed. St Paul articulates this well:

I consider that the sufferings of this present time are not worth comparing with the glory that is to be revealed to us.’ (Romans 8:18)

Indeed I count everything as loss because of the surpassing worth of knowing Christ Jesus my Lord. For his sake I have suffered the loss of all things, and count them as refuse, in order that I may gain Christ.’ (Philippians 3:8)

In Acts it was Stephen’s witness to the Lord’s eternal glory that led to his ecstatic joy and martyrdom from stoning at the hands of his captors. The saints are martyrs in Christ know that in him they are made truly alive even while they are dying. How could they deny the Lord of life in whom they are rooted into the divine life of the Trinity?

How then are we to apply this call to witness given our own particular circumstances of lockdown and limited access to the sacraments?

Cardinal Pell seems to offer a compelling model that we might seek to emulate. He was unjustly imprisoned, and by a sheer act of spiteful cruelty from the state was denied the ability to celebrate the sacrament of the mass for more than 400 days.

Cardinal Pell had every reason to come out of gaol full of resentment at the manner of his treatment. Yet, while he was obviously scarred by his experience and justifiably insisted that an inquiry should take place as to how such an injustice was able to take place, he held no bitterness towards his persecutors. Here is a man who knows Christ as the true Judge and in whose hands his life ultimately rests.

The inability for us to live out the sacramental life as a Catholic is a real trial but also an opportunity to bear witness to the Lord. How we react and respond to this time of testing will either lend credibility to our witness to Christ or fail to show any differentiation between the ways of faith and the ways of the world. If it is the latter, if we choose to react in a worldly way, then a great opportunity to renew the life of the Church in this country will have been lost.

In this mini-martyrdom, are we ready to act and speak in a way that gives a reason for the hope that is in us?