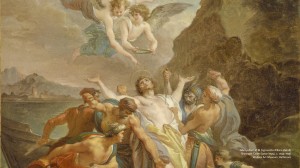 Yet if one suffers as a Christian, let him not be ashamed, but under that name let him glorify God. (1 Pet 4:16)

In the Gospel our Lord refers to glory five times. The first reference is to our Lord praying to the Father; “glorify your Son that the Son may glorify you.” This is a strange prayer request, because surely the whole of the earthly life of Christ has revealed and radiated the Father’s truth and glory? A closer reading reveals that this particular request relates to the coming events of Christ’s rejection, crucifixion and resurrection. This is the summit and ultimate moment of heavenly glory. The uniting of the will of both Father and Son, in the actions that are to take place, assures that both are glorified. That which seems immediately to be a tragedy and loss will, later, be revealed as the moment of divine victory — a victory over sin, death and the devil, opening up eternal life to those, who believing in Christ, have the Father revealed to them. “He who has seen me has seen the Father.” (John 14:9b) One of the themes in John’s gospel is that our Lord’s ‘lifting up to glory’ is about him being raised up upon the cross as much as it is connected to his resurrection and ascension into heaven.

The second element of glorification is that which the Father will bestow upon the Son, once his work on earth is completed. This glory is the heavenly glory that our Lord emptied himself in his incarnation for the sake of our salvation, as scripture tells us; ‘though he was in the form of God, he did not count equality with God a thing to be grasped, but emptied himself, taking the form of a servant, being born in the likeness of men.’ (Phil 2:6–7) This is the glory Christ receives at his ascension to the right hand of the Father. This glory now however encompasses the wounds of his Passion. Throughout his resurrection appearances it has been the wounds of his crucifixion that affirm that he is the Lord who died and is now risen; ‘He said to Thomas, “put your finger here and see my hands, and put out your hand, and place it in my side; do not be faithless, but believing.”’ (John 20:27) These agonising wounds are now the signs of his triumph and glorification of the Father.

The third aspect of glorification that our Lord refers to is that he might be glorified through his disciples. The disciples of Christ belong to both the Father and the Son: “all mine are yours, and yours are mine” says the Lord. They are children of the kingdom of God and heirs of the promise. Christ has revealed the word of God, the word of truth, to them and they have believed and accepted the true identity of the Lord as Son of God. Earlier in the gospel we have Christ saying, “This is the work of God, that you believe in him whom he has sent.” (John 6:29)

There is a deep connection between what we believe and how we glorify Christ. We might find this slightly confusing at first. It would seem self-evident that it’s what we do, more than what we believe or know, that either brings glory or scandal upon God and our faith.

We so often fall into this trap of thinking that belief and actions are separate categories or aspects of our faith. They are not. What we believe impacts dramatically the direction and manner of our actions, aims and goals. One example should demonstrate what I mean. St Paul, before his conversion, was terrifying and persecuting the Church based on his beliefs about God. It was those beliefs that drove him to his actions. It was only the Damascus Road experience and hearing the Lord’s voice, “Saul, Saul, why are you persecuting me?” that turned his actions around.

What we think and believe about the Christ is paramount in directing our actions. If Christ is the Word made flesh, God incarnate, Son of the Father, who speaks the words of eternal life, then what he teaches and demonstrates has eternal relevance. They cannot be brushed aside and must inform both our own words and actions.

Most do not read theological text books but are informed about the faith predominantly through the prayers of the Church, in particularly the liturgy of the mass. Lex orandi, lex credendi, meaning we pray what we believe. In turn that which we believe, we aim to put into practice. The clearer we are able to live out our faith the greater glory of the Lord is revealed.

St Peter, in his epistle, has constantly tried to get across that it is trust and belief in the Lord that will enable us to face the trials we are experiencing in a manner which reveals the glory of Christ. Indeed, after the example of Christ himself, whose suffering glorified his Heavenly Father, it is these very trials that will not only glorify the Lord but will be our emblems of glory in the heavenly realms. Nowhere is this more clearly displayed than in the Martyrs and the manner of their death. The signs of their sufferings are also carried into heavenly glory as they bear witness to the wonder of God’s saving grace.

Maya Angelou, a famous writer and performer, was once asked in an interview if she was a Christian. Her response was something like, ‘Goodness no! It is what I try to be, but it isn’t something I can yet claim to be.’ What she was trying to say is that there is a manner of life and belief that reveals oneself to be Christian — that is, Christ-like.

All the baptised have a vocation to be a witness (a Martyr) in what we believe, in how we pray, and in the manner of our lives, as we put into practice the Word of truth that is Christ the Lord. In this we reveal that we are being authentically Christian, and our Lord is glorified.