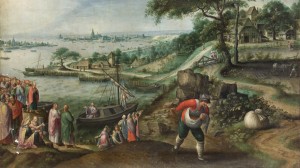 So shall my word be that goes forth from my mouth; it shall not return to me empty, but it shall accomplish that which I intend, and prosper in the thing for which I sent it.

In Matthew’s gospel Jesus has come down from the mount where he has taught in a direct and straightforward manner. Here by contrast we find him by the lake side, this time however he teaches using parables.

The Greek word for parable carries the meaning of comparable but the Hebrew word it translates carries more of the meaning of a mystery or riddle. This helps throw light on Jesus’ words to his disciples when they ask why he is now teaching in parables?

He answered them, “To you it has been given to know the secrets of the kingdom of heaven, but to them it has not been given. This is why I speak to them in parables, because seeing they do not see, and hearing they do not hear, nor do they understand.

This tells us that, firstly, God is the revealer of eternal truth: we cannot get there by our own human cleverness. Divine truth is revealed and can only be known by grace. Secondly, there also has to be a desire and act of the will on our part to want to understand the things of God — it requires a bit of hard work, without which we will remain blind to them.

The first of a number of parables that Our Lord tells in this section of the gospel is possibly the most well known — the parable of the sower. This is perhaps well known because Christ is recorded not only telling the parable but also giving its meaning.

Those who first heard this parable might well be asking themselves, ‘what sort of farmer scatters the seed for planting, all along the path, stony ground and even among the thorns? Is he incompetent or just plain foolish? Of course nothing is going to grow properly in those conditions! The second thing that they would be astonished at is the amazing crop that is yielded from the good soil: thirty-, sixty- and a hundred-fold. Now a return of sevenfold is a good harvest and a return of tenfold would be a absolute bumper year. Thirty-, sixty- and a hundred-fold would be nothing short of miraculous! That in itself is a clue to its meaning. Miracles are the work of God a sign of his presence and indicator of his purpose and will.

So we can infer that the sower is God himself and it is the word of the kingdom that is sown. This tells us that rather than being incompetent God has a gratuitous generosity in the sharing of his word, no one is excluded from receiving the Word.

The Word that is being referred to is that which we hear in the prologue of John, ‘The Word was with God and was God.’ It is the Word that at the beginning of creation was spoken and thus through the Word, life was formed and brought into being out of nothing. Christ is the divine Word of life that was made flesh. It is Christ the Word that is offered in the good news of the gospel.

The Lord goes on to explain to his disciples why some people cannot or refuse to hear and receive the Gospel, the Lord of Life. There are a number of contributing factors. First is an external influence, the Devil himself who seeks every opportunity to snatch away that which is sown — it doesn’t even have a chance to take root before it is forgotten. The devil is real and is denied at our own peril. Our salvation and the fight for our souls is played out on the larger canvas of both heaven and earth and involves many principalities and powers that are external of the mere human spirit and soul.

The second reason given is that is that there are those who receive the Word at first with great joy, yet abandon the faith when things get difficult. Their faulty thinking sees God as some magician who will wave his magic wand and make everything alright — and when he doesn’t, they give up the faith. Their complaint is that they went to church and said prayers but God didn’t keep up his end of the deal — it is a immature childish response. It is certainty true that Christ has sought to bring us out of darkness into his glorious light and redeem us from death to life. He does this however by giving us a cross — the way of the Cross is the way to Life.

The third reason is that so many are not attentive to the faith and do not give it time because they are consumed by the cares of the world and allure of material wealth. Their security and sense of meaning and worth is rooted in the things of this world, money, power, honour, fame, popularity and the need to fit in. There is no room for Christ, no attentiveness to the Word and mammon becomes their God. Those who place their hope in the world that is passing away, will pass away with it.

Here however we need to halt for a moment. If you haven’t already you might be tempted to start to identify and name individuals who fall into any one of those categories. You might even be giving sideways glances and beginning to wonder whether you know…

A deeper and more honest reflection before God will tell us that this parable reveals a mystery that should inform us that these categories not only identify individuals but are active within each individual as well. They perhaps reflect something of our own spiritual journey, the times when we have allowed the joy of the gospel to be snatched away from us by the enemy. The lack of gratitude, praise and thanksgiving are a sure sign of this. There are undoubtedly times when we have given in to the temptation to give up, to complain that it is all too hard and we cannot carry on. Have you ever found yourself saying these or similar words, “The cross Lord is too heavy and I cannot carry it any longer. I’ve prayed and you aren’t listening — I am not talking to you anymore.”

What about the cares of the world? If we simply and honestly ask ourselves what is our first love? What excites us, gets us out of bed in the morning? Have we ever found ourselves either abandoning our prayers or getting them out of the way as soon as possible so that we can get on with the things we really want to do? How often has our self worth been linked to things we have, jobs we do, or how other people see or think of us?

Yet here is a promise: ‘my word shall not return to me empty, but it shall accomplish that which I intend, and prosper in the thing for which I sent it.’

Some seed fell on rich soil and it produced a hundred-, sixty- and thirty-fold. Where the word finds a receptive heart then the miraculous happens and the Lord of Life bestows his graces. The very things of God, all that is eternal, begins to take shape within us preparing us for eternity in heaven with our Lady and all the saints. The more we are able to fall in love with our Lord and open our hearts to his will, the better we are prepared for that Day of days. The greater the abandonment to Christ, the freer we will be from the allure and traps of the principalities and powers of this world.

This is indeed what God intends his Word to accomplish — the salvation of souls and a rich harvest unto eternal life. As we receive the seed of his word in mass today let it bear us up unto eternal life in Christ.