The kingdom of heaven is like a net which was thrown into the sea and gathered fish of every kind.

One of the great challenges which the early Church faced was to understand the move from the covenant people of Israel, the physical descendants of Abraham, to a universal message calling all people to come to the knowledge and love of God regardless of physical descent. We read much about this struggle in the Acts of the Apostles, but it wasn’t just something that came along after Christ’s Ascension — it was present in the Old Testament, and in Christ’s teaching such as this parable.

God raised up the covenant people of Israel as part of the preparation for the coming of Christ. A people selected and drawn out to receive the first parts of the revelation of God, in order that that when the fullness of the revelation came in the person of Christ, they would recognise it and would receive him for what he truly was. The plan was always for the initial limited covenant to reach out to all of the world…all of humanity shares in the Fall, all of humanity suffers from that separation from God, and so it would seem very odd if not all could share in the restoration which Christ offers. God’s love has never been exclusive, he made us all, and so he loves us all, and so he wants all of us to come into a relationship with him.

Those fish of which Christ spoke in that parable come from every possible group of humanity. From every nation and race, from both sexes, from young and from old, from rich and from poor…all of the ways which we as humans find or invent to divide us from each other collapse under the calling of Christ, nobody is excluded from that call. 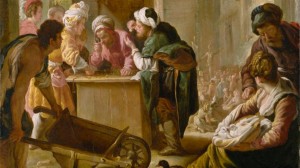 But — and it is a very big ‘but’ — whilst nobody is excluded from the call, that does not mean that people won’t choose to exclude themselves from the reality. What we receive from Christ is an invitation, he doesn’t force us into the kingdom. We hear how this can work in that other parable in today’s Gospel, the merchant finds the pearl of great price and he responds, he sells all that he has to buy the pearl. He could have ignored the pearl — it would be ridiculous, but he could have done so. But in the parable he didn’t, he saw what the kingdom of heaven is like, and so the merchant realised that it is far more important that he have this, than everything else. He also realises that the cost is high, the kingdom isn’t something easily reached — few things of value are easily attained, the cost is made clear to us.

We have found that hidden treasure, that pearl of great price, we have accepted Christ’s offer…but we must also consider carefully the price which is being asked of us, the price is nothing less than everything which we have. But when we realise the value of the kingdom, then we can give everything which we have to God, and not merely do so grudgingly, but as the first parable tells us, ‘joyfully’. If we do this, then the gains we will have are utterly beyond comparison — this is why the treasure hunter sells everything he has with joy, because by giving all of that up, he gets more than he can imagine in return.

But, he still needs to give it up. There isn’t any option of being half-in, there isn’t any sort of associate membership. This doesn’t mean we literally have to give away everything which we have, but it does mean that we need to place God and our relationship with him, above everything which we own. This doesn’t just mean our material possessions, but all of our hopes and aspirations too; our talents and our affections — everything which is ours. The cost is genuine, and the cost is high; we need carefully to weigh this in our minds before taking the plunge. But as we weigh the cost we need to remember that the parables don’t end with the joyful embrace of the kingdom, they end with judgment. Christ warns us that there will come a moment where we are either in or out. No half measures.

The choice is ours, and is in front of us every day. We have been given the gift of faith, we have been brought into the Church, we hear the words of Christ…we need to ask ourselves how we respond. We can give all that we have to God, knowing that everything works for the good of those who love him; or we can hold back, we can cling to the temporary pleasure of our possessions. But if we do cling to them, then we can’t claim that we haven’t been warned about what will follow — that has been made clear to us.