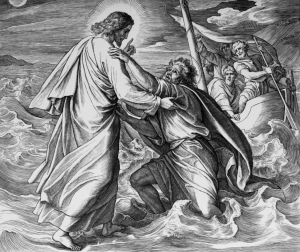 When Peter saw the wind, he was afraid, and began to sink.

When we think about S Peter’s venture out into the water we can readily sympathise with his fear. We know well the story about Christ walking on the water, but of course he was God incarnate and so being able perform miracles isn’t overly surprising…but for S Peter to get out of that boat required a powerful act of faith, and so it’s hardly surprising that his nerve failed him.

It is a common theme in the Gospels that Christ’s miracles were connected with the faith of those affected. Think of lack of miracles when he returned to his home-town — he was recognised, and so people didn’t accept that he was special; they remembered him as a boy playing in the streets, helping Our Lady and S Joseph, and this gave them a blockage which stopped them from having faith in his power. It wasn’t that he didn’t have the power, but that the miracles were the joining of his supernatural power with the faith of those in need. At the opposite end of the scale, he met people who were not even Jews, but who nonetheless expressed strong faith in him and in his power, and so they were graced with powerful healing for those whom they loved, those on whose behalf they approached Christ.

The same principle is at work in today’s Gospel. Having seen Christ walk on the water, S Peter in one of his typically impetuous moments of faith calls out for Christ to summon him. S Peter has a strong powerful faith, he knows at that moment that Christ’s power is enough to support him outside of the boat. He climbed out and his faith was proved right, he walked to Christ on the water. This is where we are all supposed to be too. Christ has come near to us, we have seen him, and have been called by him. Climbing out of the boats of our normal lives, we are walking on the waters towards him.

If only it were quite that simple though. S Peter walked towards Christ, but there were wind and waves around him. He saw those, and suddenly that faith which had kept him from sinking seemed to melt away. Remember that Christ works his miracles through the faith of those who need them. S Peter’s faith weakens, and so too does his willingness to receive Christ’s miracle…he starts to sink. He stops looking towards Christ, and rather starts to focus on the challenges to his relationship with Christ. Rather see the work which Christ has done, and is doing in him, he allows his fears to invade. He starts to sink.

But at the last moment things get sorted out. As he begins to sink, it would be so easy for the fears, for the wind and waves, to become even more overwhelming…but deep down, his heart still belongs to Christ, and so he turn back in desperation and calls on Christ to save him. In doing this, he makes a sort of mini-profession of faith — he shows that he knows that Christ can save him.

How this applies to us can become clear. We are walking amid those waves, we have that wind blowing in our face. Not the same literal wind and waves, but for us this is everything which would draw our faces from looking solely towards God. Everything which would weaken our trust in God — the many challenges in our lives, the pains of this world which make us wonder where God is. There hasn’t been a single Christian who hasn’t had these challenges, there hasn’t been a single Christian whose trust in God hasn’t been challenged.

What we need to do though is keep our eyes fixed on Christ. He is the one who is supporting us; he is the one whose strength is enough for us. As soon as our eyes start to move around, to ponder those challenges, to wonder whether we can truly survive all of these dangers…that’s when we become like S Peter and we start to sink.

When this happens, we need to become like S Peter again. We need to turn straight back to Christ, and cry out from the depths of our hearts ‘Lord, save me’. Christ is always there, he is always walking with us, and he wants us to walk with him. He gives us so many gifts to help us in that walk — most of all the Sacraments, with the grace which they give us. But if, even with all of these supports, the challenges of our lives and of the world around us start to overwhelm us…then Christ still stands there ready to help us.

S Peter already had a deep love and faith for Christ by the time he walked on the water, we too have been given the gift of faith in our Baptisms — we just need to keep out eyes fixed on Christ, and then we need not fear the wind and waves, we can know that Christ stands there ready to give us whatever help we need.