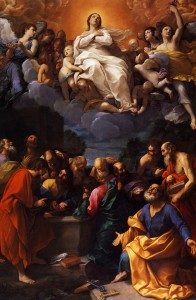 For behold, henceforth all generations will call me blessed; for he who is mighty has done great things for me, and holy is his name.

When Our Lady first said those words, ‘he who is mighty’ had only just begun to do great things for her; today we celebrate the conclusion of those great things which he did for her. Almighty God had given her the particular grace of being immaculately conceived, and then had preserved from all sin; she had been given the gift of motherhood (despite an apparent vow of virginity); but then at the end of her life, everything else was brought to completion, she was taken body and soul into heaven. She had so many great things done for her, and as we contemplate them we give thanks to God, and we rejoice to call her blessed.

As we reflect on the text of the Magnificat, we cannot fail to notice that everything is about God. Our Lady speaks the great praises of the one who has done things for her and to her — has indeed done great things. She knows that everything which she has, all of the many gifts which have been given to her, are because of God and his goodness. By herself she does not deserve anything — but by the grace of God working in her, she receives so much that all generations acknowledge her as ‘blessed’.

This reflects one of her most powerful qualities: her humility. She begins her praises of God by placing herself on the lowest rung — she calls herself his mere handmaiden. She knows that everything which she has comes as the free gift of God, and because she trusts in his great love for all of humanity, she is happy to be called his lowly servant…because she knows that this where she can have his love poured out into her.

But we can also see a path which we should follow.

Our calling from God will not be the same as Our Lady’s — but it will need the same response from us. A humble acceptance of God’s plan, and a willingness to embrace it; an acknowledgement that everything good which we have comes from God, rather than our own merit.

If we have that same attitude as she had — then what she received today, we will receive in due course. The Assumption of Our Lady is not just something given to her, it is also a promise made to the rest of humanity. When Christ was raised from the dead, death had its power destroyed; when Our Lady was assumed God showed that this destruction of death meant that heaven is open for all of us who trust in him and follow him. Our Lady is the pre-eminent disciple of Christ, she is the model for us all in following him…by being assumed, she shows that heaven is an option for us all.

This doesn’t mean that we will be assumed in the same way — she has gone first as the proof to the rest of us. Our bodies will be laid to rest in the grave, and will then (we pray) be reunited with our souls in heaven at the end of time. And when we get there, she will be waiting to greet us as her beloved children.

What we need to do now is follow her example. Be faithful to her Son, seek to be as pure and sinless as she was, have the same humility as she had, and accept the plan which God has for us.

If we decide to follow her example, then she stands ready to assist us with her prayers. Let us always turn to her, and ask for her aid in following her Son.