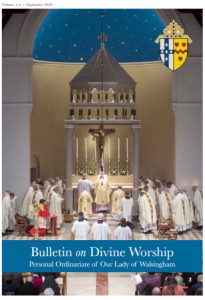 The Month of October

How might an ordinariate community mark this month? In the Ritus Servandus*, commonly found in sacristies, two particular devotions suggest themselves. First, the Yearly Dedication of England to the Blessed Virgin Mary. This is to be recited publicly, ideally during Exposition of the Most Blessed Sacrament, on the first Sunday of October. The prayer contains references to the ancient origins of the Catholic faith in England, and also to “England thy dowry.” Secondly, the so-called October Devotions or more properly Devotions to Our Lady of the Rosary for October. These were instituted by Pope Leo XIII for recitation from 1 October to 2 November inclusive. They were to be said daily, either in the morning at Mass or in the evening before the Blessed Sacrament exposed. The devotion involves the recitation of at least five decades of the Rosary, followed by the Litany of Loreto, and the Invocation to Saint Joseph. All these texts are indicated in the Ritus Servandus. Ordinariate communities in particular might make October a time to help new Catholics become more familiar with the Rosary, or to invite Anglicans who pray the Rosary to do so together in a Catholic church, before the Blessed Sacrament.