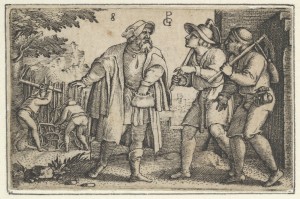 “Which of the two did the will of the Father?”

The epitaph on a person’s headstone “He meant well” or the idiom “the road to hell is paved with good intentions” might spring to mind listening to the gospel reading today.

Our Lord however is speaking to the religious leaders and wanting to demonstrate or illuminate the blindness of their own plight before God. It is those who wish to present themselves as religious, but do not take sin seriously (unless it’s someone else’s), believing that they themselves are not really sinful, who receive his sharp rebuke.

If we are not sinners then we have no real need of God. Our Lord recognised this when he stated that he had come to call sinners not the righteous. What indeed has God got to offer the (self-) righteous?

When sin is not taken seriously then any morality is malleable and can be adjusted to the societal norms. Sin, judgement and hell become theoretically possible but in reality are rarely encountered. We’ve all heard the argument that because of the compassion of God, hell, if it exists at all, will be empty.

This thinking is rooted in a misconception of God’s love. St Paul’s great Christological hymn in our second reading gives us a better understanding of what true divine love looks like. It is the humility of Christ who empties himself of all his heavenly glory to embrace the cross to make possible our salvation.

When the reality of sin is diminished, the need for salvation, the extent of God’s mercy and the depth of his love is also diminished with it.

God and faith, as long as it doesn’t demand too much of us, can be tolerated as a cultural entity alone. This is the faith I grew up with. It can also be nice to have as it can give us a nice warm feeling inside but it’s not essential — a good cup of hot chocolate can give me the same feeling. Am I using hyperbole? Maybe, but something along these lines might explain why the Church in this country is in such dire circumstances.

The two brothers represent two types of people. The first son represents those who have initially rejected the law of God and the work associated with it. These are the well-known sinners of tax collectors and prostitutes that our Lord identifies. The second son he identifies with those who have said yes to receiving the law of God and its demands. They are the scribes and Pharisees who present a religious exterior and language that others might assume as being holiness.

The important difference however between the two sons is not so much their initial response, but which of them got on with the work set before them by their father.

What work of our Heavenly Father was it that the tax collectors and prostitutes were getting on with that the scribes and Pharisees refused to participate in? A clue comes in our Lord’s reference to John the Baptist. John came preaching and ministering a baptism of repentance. Who was it who knew they were sinners and came out to repent because they saw and believed that John the Baptist was a prophet sent by God? Soldiers, tax collectors and prostitutes!

Yet, despite what they saw, the scribes and the Pharisees would not humble themselves to become servants and recognise that they were sinners in need of repentance as well.

The second clue to the work that the Father has called the people of God to is in the words of our Lord to very that question: “What must we do, to be doing the works of God?” Jesus answered them, “This is the work of God, that you believe in him whom he has sent.” (Jn 6:28–29)

Here again we see why the tax collectors and prostitutes were entering the kingdom before the scribes and Pharisees. It was they who were perfectly aware of their sin, who believed that in Christ was to be found their one chance of salvation, to encounter the merciful love of God. They had no trouble believing that our Lord was approved of God, was sent by God, through whom miracles were worked by God, and were able to trust in the words that he spoke with an authority they had never encountered before.

The scribes and Pharisees, like their ancestors before, could not accept what was before their eyes, and sought to do away with Christ as they had all the prophets before him. Their pride blinded them and they could not walk the way of humility which required accepting that they were sinners and as much in need of God’s loving mercy as those whose sins were more public.

A sinner who acknowledges his need of repentance creates a disposition of the heart to see, hear and accept that Christ is the one who has won our salvation.

The call to repentance and belief in Christ as the bread of life was too much for many who were just not prepared or willing to humble themselves before Christ. Many disciples stopped following him. Our Lord asked the Twelve if they would leave as well and Simon Peter answered him, “Lord, to whom shall we go? You have the words of eternal life!” (Jn 6:67–68)

This simple but profound statement of Peter reveals that ‘the words of eternal life’ that Christ spoke are exactly that: eternal. They reveal a truth that isn’t malleable to any particular age or social pressure. They are definitive, demanding the conversion and reordering of our lives in conformity to their precepts. They are words of life, giving life and restoring our true human dignity to those who seek them diligently.

Those who seek to conform their will to these words of Christ discover that they themselves begin to reflect the image of Christ to the world. For he is that eternal Word made Flesh who gives himself to us as the word and bread of life.

The editorial title to this article comes from words which may be used on Ash Wednesday.