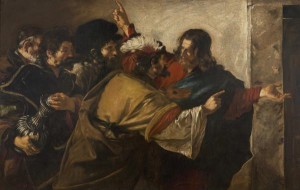 But Jesus, aware of their malice, said “Why put me to the test, you hypocrites?”

There are several cases like this where the Pharisees asked questions of Our Lord, often with long introductions praising him, but getting a true answer was the last thing in their minds. They were asking questions simply to trap him. We can also think of the long convoluted story that the Sadducees came up with of seven brothers marrying the same woman to try and prove that there would be no resurrection — very much in the same vein.

The point about today’s question is that they were trying to make Christ take sides between the Roman occupation and the Jewish focus on God and his unique privileges. As they imagined it, if Christ said ‘yes’ to paying taxes then he would be siding with the hated occupiers. He would then lose credibility in the eyes of his Jewish followers, how could this man be a true prophet if he thought that those wicked Romans deserved our money? Still less could he be the Messiah, the one who was going to bring national freedom, if he accepted being under this foreign empire.

On the other hand, if he took a stand for the liberties of the Jewish people, then it would have been easy for them to send a few anonymous reports to the Romans and get him quietly taken away and killed. Either way, he loses.

The problem was that their vision was too narrow. They didn’t realise what Christ was about — their image of the Messiah didn’t fit with what Our Lord did and who he was.

The freedom which he offered to the Jews wasn’t a mere political freedom; the chance to overthrow an earthly empire. An earthly empire was far too small for him to be bothered about. True freedom, the freedom which he offered, was and is something far more profound. A freedom which exists first in the heart, because it is a freedom which comes from God in his love for us all.
Christ knew all of this, he knew why they were putting these questions to him. But, knowing that, he still answers them. He doesn’t merely call out their hypocrisy and then evade the underlying question — this is God incarnate, not a politician facing a ‘gotcha’ question from the media. He gives them an answer which reveals their hypocrisy, but also shows them how the situation should be addressed.

Remember that their plan was to make him take sides, in a case where taking either side would present problems to him. He manages to avoid their trap, and did so in quite a simple manner — he looks upwards. He leaves behind their pettiness by turning to God, and turning to the real and important issues. But at the same time, he isn’t ascending into a world far removed from the challenges which they faced in their daily lives — he looks upwards, but doesn’t leave the people behind.

The two-fold answer which he gives is now famous: render to Caesar the things that are Caesar’s, and to God the things that are God’s. He isn’t becoming a political revolutionary, because that isn’t his mission, he’s here to call people to God. In doing this he reminds the people that the things of this world are passing and it is only in God that we can find something which lasts.

This message is true for us today as well. We are called to live in human society — a society which, like the Roman Empire is full of problems and abuses. A society which allows many wicked things to continue, and indeed promotes many evils. But this does not mean that we are called to abandon it. We need, in our own lives, to render to Caesar this things that are Caesar’s. This does not for a single moment mean approving of those evils which are allowed to flourish; but it does mean that we don’t live as though the world around us is nothing to do with us. We live in that world, we do what we can to make it better — being leaven in that society, being salt and light, as we are told elsewhere in the Gospels. Christianity is to be lived in the world, full of messiness as it is.

This isn’t an escape from the world — we are called to live here for the moment; we certainly have to pay our taxes — but it does mean that everything which we do needs to be placed within our relationship with God. This relationship doesn’t give us an opt-out of the demands of our life here on earth — we do have a responsibility to society around us, especially to those in need. But now we can see the nature of that responsibility more clearly — we have that responsibility because of our relationship with God, not in spite of it. The concern for the needy around us is because of God’s love for them; if we love God, then we too must love those in need.

Those Pharisees thought that they had the perfect way to discredit Christ — but he simply took it as another opportunity to share the message of God with those around him. That message is that God must come first in our lives, that everything which we do, we do out of love for him. But this does not mean we have an escape from our responsibilities here on earth — but even here, God must reign in our hearts, and we should seek to bring him and his love into our society ever more and more.