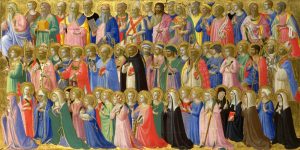 Fr Thomas’s homily at the Mass on All Saints’ Day

We are God’s children now; it does not yet appear what we shall be, but we know that when he appears we shall be like him, for we shall see him as he is.

Today’s feast is a yearly reminder that the Saints are not merely ‘them’, not merely people far removed from us, people who lived years ago, who lived lives utterly unlike ours — no, the Saints are supposed to be ‘us’ as well. We are God’s children, in our baptisms we have been adopted by him, and made part of Christ’s body, the Church. We are called to be Saints, called to join him in heaven for all eternity.

When we hear stories of the Saints they can seem extraordinary and so far removed from us that we can surely have no hope of joining them. S. Christina the Astonishing is claimed to have levitated because she couldn’t stand the smell of sin and wanted to escape from it; S. Simeon Stylites lived for nearly 40 years on a tiny platform which he built on top of a pillar, from which he would harangue visitors with sermons; on Tuesday we celebrate S. Winifred who, pursued by a potential suitor, was decapitated in fury when he discovered that she became a nun. Fortunately S. Beuno was on hand who re-attached her head. Leaving aside the potential for stories to grow in the telling, when we hear about the Saints they do often seem to be entirely unlike us and somewhat difficult to relate to. But the message of All Saints’ day is that we are called to become Saints because we are God’s children. We are supposed to be among those that S. John spoke of in saying that he saw a great multitude which no man could number.

The Saints are indeed those who performed staggering works, but they are also those who lived a quiet life seeking to draw closer to God, to leave their sins behind, to serve their neighbours out of a spirit of live for God. Those who allowed God to work in their lives so that when they died they had been fully prepared for heaven — for union with God for all eternity. The vast majority of their names are unknown to us, but they all accepted the offer which God makes: they lived in his grace and allowed him to transform them from fallen and sinful people to redeemed and sanctified people.

All Saints’ Day celebrates all of these people — celebrates that God worked in them, that they were open to his working, that they responded to his call to them. All Saints’ Day celebrates that people who seem in many ways to be entirely ordinary, just like all of us, were able to co-operate with God’s grace and so were able to win that great victory of entering into heaven — where they now sing for ever “blessing and glory and wisdom and thanksgiving and honour and power and might be to our God”.

As it celebrates all of these countless and unnamed thousands, it does something else too — it challenges us. These unknown people who have won the crown of glory which fades not away were so like us in many ways. If they can make this journey to heaven, then surely so can we. This is what God is calling us to. This is what God wants from us. This is what Christ’s incarnation, death, and resurrection were all about — to give us the possibility of becoming one of them. To give us the chance to wash our robes in the blood of the Lamb, and through that blood to enter heaven.

When we look at ourselves, and then contemplate God, we can quickly see that there is a significant difference between the two. We can rapidly become aware that we are not ready for heaven — it isn’t just that we don’t levitate to get away from the smell of sin, or that the thought of living atop a pillar for decades seems beyond us — we are painfully aware of God’s goodness, and our failings. This is where S. John’s epistle comes in useful — ‘it does not yet appear what we shall be, but we know that when he appears we shall be like him.’ God will give us the graces which we need in order to make the change which is needed within us — he is the one who does the real work, what we need to do is to accept the grace which he offers.

In our Gospel today, Christ speaks of what we need to work on. That list of beatitudes is the proclamation of those who are blessed — and these are not given merely so that we know who is blessed; but so that we can see what qualities we need to develop within ourselves. If we wish to be blessed, if we wish to be among those supremely happy Saints, then we need to become meek, and pure in heart, we need to be peace-makers, and we need to hunger and thirst for righteousness. Not in our own strength, we would surely fail to get very far if we tried, but in the strength of Christ. We are to become those who have washed our robes in the blood of the Lamb, that blood which is made present at every Mass, and that blood which washes away our sins in confession.

So today we give thanks for all of those Saints who have gone before us, who have accepted God’s arms reached out to them, and through the blood shed by Christ on the Cross, have attained to heavenly glory. We ask for their prayers in all of our needs. And we resolve again to try and follow the same path which they followed — to ask for God’s assistance in becoming as he is, to ask for him to wash our robes in that same blood of the Lamb, so that we too may stand with that countless number praising God in heaven.

All SaintsdiscipleshipHomilyKingdom of HeavenThe Beatitudes