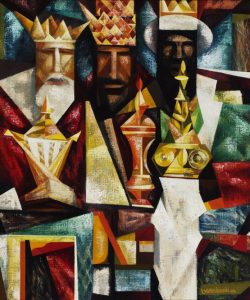 Fr Thomas’s homily at Mass on the Epiphany (6 January)

“They departed to their own country by another way.”

If we go through the account of the Magi coming to visit Christ there are two changes of direction, they have a practical basis but there is also a deeper sense of what is going on and how this can have an importance for us today.

Initially those Wise Men gazed up at the skies, as they had done for their entirely lives, they tried to gather news of the world from the changes among the stars — something caused them to think that a new king had been born, and they went off to find him. They travelled to Jerusalem on the basis of seeing that astral vision. There, amidst the vexation which Herod experienced, they were told to go on to Bethlehem; with this new knowledge they ventured out, and the star again guided them to find the infant king. Having made their visit, having given their homage they returned home, following a different route to avoid King Herod.

So both in their journey towards Christ and travelling home they needed to make a change — from their mistaken visit to Jerusalem, and returning by ‘another way’. Is this merely a case of S. Matthew despairing at the lack of first century sat-nav? Surely not.

If we go back to the beginning; these Wise Men, these Magi — they were outside of the covenant of Israel, these were not the sons of Abraham, they were uncircumcised, they didn’t study the Law of Moses. In all probability they were part of what later developed into Zoroastrianism, they believed that events on earth were paralleled by changes in the stars and so they studied night sky for evidence about what was happening. This isn’t quite the same as reading a newspaper horoscope, but it certainly isn’t the same as relying on sound revelation from God.

But yet, even though they were looking in the wrong place — even though they were studying stars rather than looking to God — they were undertaking this search in good faith, they were genuinely seeking after the truth of the world and what God was doing. God knew this, and so he rewarded their search with a hint — he let them know that something was happening, something which was of such great significance that they needed to respond. They were looking for a sign among the stars, and so that’s what God gave to them.

Secure, as they thought, in their faith and in their belief that they had been given a sign of truth they began their journey. It seemed obvious and natural that they should go to Jerusalem – that’s where a new King of Israel would be born, obviously.

But here we reach the first problem — it’s not obviously the right place, indeed it isn’t the right place. As they arrived, as they met with Herod, they were confronted with the fact that their beliefs were wrong — or rather, that they needed to be purified and refined. Their star-gazing religion wasn’t enough to lead them to the truth. God had used it, given their deep desire to find the truth; he had given them a hint, and it brought them closer to him and his truth…but it wasn’t enough.

Then they were given the text of the Prophet Micah to point them towards Bethlehem. The sign of the star had brought them close, but they needed God’s true revelation to lead them across that final step. They had the humility to accept that leadership — they were willing to travel away from the obvious and natural place in Jerusalem to the small town of Bethlehem because now they were following God’s own revelation.

Now that they submitted themselves to God’s word, they were brought to meet with the Truth itself, the new-born child who was that Truth which they had been searching in vain to find. They rejoiced greatly at the precious gift which they had been given.

Eventually it was time for them to return home, rather than simply retrace their steps they took a new journey. This allowed them to evade Herod, but more importantly it shows that they had been changed by what happened. They had encountered the truth — first, the truth of God’s prophets, and them the incarnate truth Himself — their lives could never simply return to what they had been.

In that journey the Magi stand in for all of us. We too, hopefully, are searching for the truth; and it we are to have that same encounter with the truth then we need to make those two detours as well.

We need to have the humility to put aside our own ways of looking and searching. We need to be willing to submit ourselves to God’s revelation, to the Faith once delivered to the Saints, to the Church who has been given to us as our guide. If we simply rely on our own strength and our own thoughts we might well end up at Jerusalem, as those Magi did; but those last few miles of the journey need us to turn to God and accept the teaching which he has given to us in the Bible, and in the unchanging teachings of the Church.

If we do this, then we will be brought to Christ — we will meet with that single source of all truth. But we also need to be ready to return home by a different path — we cannot have a true and meaningful meeting with Christ and not be changed by it. We may not end up in Cologne Cathedral, as those Magi did; but if we meet with Christ, then even as we journey home, we journey with him…and so we walk in a different way, we walk in Christ’s way. We walk with him guiding our steps. But if we walk this way, then like the Magi we will rejoice with exceedingly great joy.