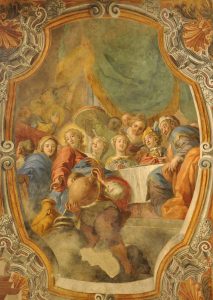 “Do whatever he tells you.”

These are the simple but profound words of Our Lady to the assistants at the wedding feast of Cana. The wedding feast, which would typically last between five and seven days and involve the entire community, was running out of wine. The host family were in danger of being embarrassed before all their guests and having the merriment cut short, through lack of wine. The family and tight-knit community would not forget such an incident.

Our Lady turns to Our Lord for help: “They have no wine.” Our Lord responds first with an understandable statement, “O woman, what is that to you or me?” They were guests not the hosts, and it wasn’t their responsibility. An obvious act of intervention would also embarrass the hosts. Christ then goes on to make what at first seems a rather odd statement. “My hour has not yet come.”

The imagery of the wedding feast is very powerful in the scriptural prophetic tradition. From the time of Isaiah, the language of the messianic wedding feast as a sign of fulfilment was well known. With these words our Lord is looking forward to the hour of his passion and the Last Supper, the banquet of the Paschal Lamb and the foretaste of the heavenly kingdom. ‘You prepare a table before me in the presence of my enemies; you anoint my head with oil, my cup overflows.’ This was not that banquet or that hour but his actions will point forward to it.

Here water is turned into wine, not only revealing his authority over the created order, but pointing to the Last Supper where bread and wine are linked to his death and shedding of blood on the cross. The wine will be turned into his precious blood — the new wine of the kingdom that is his very body, soul and divinity, made present at every celebration of the mass.

Despite what Christ says, Our Lady turns to the wedding assistants and instructs them to “do whatever he tells you.” The result of their obedience was the miracle of the six 20-gallon jars of water being turned into the best wine the guests had ever tasted — with more than enough to go around.

The steward of the feast, not knowing where the wine had come from, toasts the groom for only producing the best wine at the last. The family hosting will for ever be remembered in the community, not for the failure of wine but for providing the best wine they’d ever had — and would almost certainly have become a part of their own folklore.

Of course the reference to the groom is also important. This epiphany, albeit quietly, reveals our Lord fulfilling the messianic and prophetic tradition in the wedding feast. The true groom responsible for the new wine of the kingdom is Christ. The Groom in the prophetic tradition is not directly a messianic figure however, but God himself. God is the groom and the people of God are the bride. God sits amongst his people so often unknown, yet for those who have the eyes and ears of faith, he brings salvation and reveals the wonder of his glory.

This reveals to us the abundant, generous nature of God, who by his loving grace gives us more than we could ever imagine. It also gives us a glimpse of the power of Mary’s interceding to her Son on our behalf and the fruit of her graces. Asking Our Lady to intercede for us is one of the most powerful spiritual weapons of grace at our disposal. We should never tire of saying the Rosary and other Marian devotions. Obedience to our Lord’s directions and teachings, even if we don’t always understand, are our means of receiving the generous gifts of the Lord. If the assistants had not done as he asked, believing the actions foolish, they would never have seen the great miracle that took place at the wedding at Cana, which revealed a glimpse of his divine glory.

How we need to hear these sage words of Our Lady, “Do whatever he tells you.” After all Our Lady had said to God; “Let it be unto me according to thy word.” They are simple words but the means by which we gain salvation, fulfil our vocation, are animated in the Spirit, encounter the wonder of his glory, and glimpse the heavenly banquet of the Kingdom.