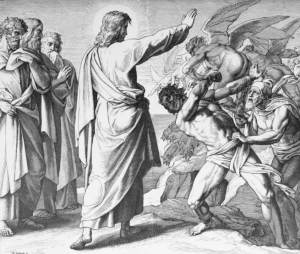 “He would not permit the demons to speak because they knew him.”

This is a rather surprising point — Christ is going round preaching about the coming kingdom of God, and yet when he meets with those who know who he is, he stops them from speaking, from saying who he truly is. If Christ were trying to live like a hermit, if he were avoiding any sort of publicity this would make perfect sense — but on the contrary, he goes into synagogues to preach to the whole community, and when they bring people to him who need healing he readily gives them his blessing and restores them to wholeness causing crowds to gather. As he does this, it’s not in the least bit surprising that the next morning when Simon Peter comes and finds him he said “every one is searching for you.”

So he can hardly be said to be avoiding publicity — but yet, but yet there is something which he is keeping quiet. He is not claiming to be the Messiah — he is the Messiah, and he never denies it, but for the moment he doesn’t say anything about it. When he meets with those demons who know full-well that he is the Messiah, he forbids them from letting anybody know.

It seems that he doesn’t want people to know who he is — which surely would go against the whole purpose of his preaching mission.

Of course, it does actually make perfect sense…Christ is fulfilling God’s mission, so every last details has been planned out for endless ages. The point is that he wants the people to come to know what he actually is and what that means, not merely to have a title attached to him.

Had those demons let slip that he was the Messiah — had people come to know it, then whenever he arrived to preach the Gospel he would have to deal with the various bundles of ideas, traditions, and random thoughts which people had about the Messiah. No longer would his preaching be simply about the coming of the kingdom of God — it would have to start by putting them right on what the Messiah was.

The Jews of the time saw the Messiah principally as a political leader — as somebody who would restore the nation, would give the Kingdom of Israel its freedom again. They knew well the story of the Exodus from Egypt — they had been slaves, held under the power of a foreign king, and God through a powerful intervention brought them out and gave them their own land, where they could govern themselves (under his guidance) and be free to worship him. When they retold that story each year, looking at their life under the Roman Empire, the moral was immediately apparent: the Messiah would repeat what Moses did, would remove the control which the Empire had over them, and give them their kingdom again. After all this is what had happened when they returned from exile in Babylon — they were free to live in their land and worship God properly — it is what had happened after the Maccabean Revolt, when the oppressive Seleucid Empire had been removed from Israel.

If people saw Our Lord arriving and their first thought was of the Messiah, then while they would have the right title for him, they would have the wrong idea of what he was doing. But if he taught them, using powerful words of preaching, and showing them the freedom he was offering by setting them free from illnesses, then they could come to see the reality which he was promising. They could come to use the word ‘Messiah’ in due course, but only once they had fully understood what it really meant.

While this was true of those whom Christ encountered while walking on earth, it is also true of us as well. We can easily miss the point of what Christ is saying to us, we can get caught up in the ideas which we find most comforting, in the thoughts we have inherited. But we need to be able to take a step back, and look at what Christ is really saying to us and to the whole world.

We are all, in various ways, caught up by the bonds of sins — our sins, those of our communities, and those of others — and Christ comes to us, as he came to so many people two thousand years ago, offering freedom. Offering to set us free from the sins which weigh us down, offering us the true and deep freedom which belongs to the children of God.

Let us, then, take the time to reflect on how we hear the message of Christ. Whether we place too many of our own filters in front of the message so that we miss out on the heart of that message. Let us also reflect on where in our lives we need to have that freedom which he brings — which bonds he can break for us, and then ask for him to come into our lives in order to give us that freedom, to break all of those bonds of slavery to sin.