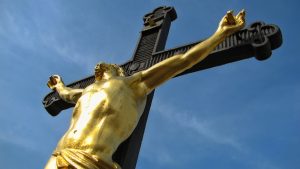 “I have glorified it, and I will glorify it again.”

This subject of glory is one which permeates S. John’s account of the Gospel. It is a central part of God’s existence — that he is glorious, and therefore that his name is particularly glorious. When Moses received the Ten Commandments for the second time, he asked that be given the chance to see God’s glory; God consented to this in part, Moses couldn’t see God’s face and still live — because his humanity would be unable to cope with such majesty and glory — but he got to see his back, the traces and remnants after God had passed by. As God passed Moses, he cried out his glorious name: “The Lord, the Lord, a God merciful and gracious.” Even this encounter was enough that Moses’ face shone with the reflection of God’s glory.

And now, in Christ, that glory is being proclaimed again. But it is being proclaimed in a very different way. That glory is being found in what Christ does. The Father tells us that his name has been glorified in Christ’s actions — in his virgin birth, in his miracles, in his teachings, at his baptism; and that it will be glorified again in what Christ has yet to do — to be crucified and to die for us all.

When we consider these two events — the giving of the law, and the crucifixion one of them strikes us as far more glorious than the other. We have a whole scene set for glorious works — a mountain covered with clouds, booming voices, Moses having to hide in a small gap in the rock so that the glory doesn’t extinguish his entire being, and then tablets of stone having the very words of God carved into them as a gift to his people. The glory really can’t be missed.

By contrast, the scene of an execution. Some women weeping, only one of his closest followers still there, jeering crowds and vicious soldiers. It seems like the absolute opposite of glory. But yet, but yet there at the heart of it all is God, and God is doing God’s work. God’s work is glorious. Of these two events — giving the law, and the crucifixion, it is only in the outward appearance that the former is more glorious. The truth is that there has been no event in human history more full of the glory of God than that man hanging on that Cross and slowly dying. But it is only with the eyes of faith that we can see that glory.

Throughout his life on earth, Christ’s glory was kept hidden — that tiny baby presented at the Temple gave no sign of his glory. The man walking around and talking to the crowds may have had a great eloquence, but his glory was kept away from the gaze of the crowds. It was revealed in part at his Baptism as the dove descended and the voice boomed out; it was shown to his senior apostles at the Transfiguration — but otherwise it was thoroughly veiled and hidden. So too on the Cross — as Gerard Manley Hopkins translated S. Thomas Aquinas — “On the Cross thy Godhead gave no sign to men.” But yet here was the moment when God is, by his own words, glorifying his name again.

The point is that Christ is showing us what God’s glory really means. When it is encountered without any veil, it is simply too much for us as humans to see — this is why Moses could only see God’s back once he had passed. When we have booming voices and clouds descending on mountains, we can fail to hear the message at the heart of it. God’s glory, that glory which Christ had been manifesting throughout his time on earth, is deeply connected with love for others — that’s what God is all about.

God, the Father, the Son, and the Holy Ghost, could have spent eternity simply sharing that love with themselves — but God wanted to have a creation on which he could lavish that love. Man having been put as the crowning pinnacle of that creation rebelled and walked away from God and into sin. But God still wanted to love him — and so Christ became man. All of this is showing the love of God, which is his glory. God the Son shows his love for the Father by submitting himself to his plans — even when this means becoming man and dying on the Cross.

The point at the heart of this is that the Cross is the ultimate symbol of God’s love; and therefore of God’s glory.

God is showing his glory to the world by allowing himself, in the Incarnate Son, to be lifted up from the earth. That lifted-up Christ is shining out to the whole world with the simple words “God is love”. Love which is willing to go to any extent, even the death of the Cross, to call us back from our sins. This is why the Cross is glorious, this is why when Christ is lifted up this glorifies God’s name, this is why by being lifted up Christ will draw all men to himself.

What of our response? This drama is not undertaken simply to satisfy God — this is calling us, calling us back to God. Calling us to consider where we have walked away from God, where we have allowed sin to reign in our hearts — where we have not reflected that glory of God. Then it calls us to repent, and to leave those sins behind because we can embrace God’s glory, we can embrace the Cross.

The editorial title to this article is a phrase from “The royal banners forward go” by Venantius Fortunatus (530–609), tr John Mason Neale.