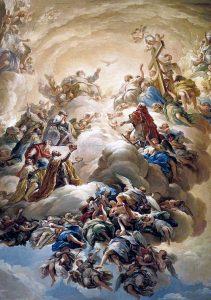 Fr Neil’s homily at Mass on Ascension Day, 13 May.

God, the Father of glory … made him sit at his right hand in the heavenly places, far above all rule and authority and power and dominion, and above every name that is named, not only in this age but also in that which is to come.

St Paul sees the glory, power, and dominion of Christ as beginning ironically at the point of Christ’s humiliation on the cross and his resurrection from the dead. This glorification is made complete in his ascension and return to the right hand of God the Father.

In John’s gospel it is made explicitly clear that Christ’s lifting up to glory was not in the first instance his ascension, but his lifting up upon the cross. It is no accident or unintended consequence that there is a profound connection between the humanity of Christ and resurrection glory. Christ’s wounds did not disappear at the resurrection, and Thomas was made to put his fingers into the nail holes and his hand into Christ’s wounded side. We can be clear that the wounds of Christ’s passion are glorified and forever enthroned in the glory of the Godhead.

One of the most extraordinary revelations of the gospel glory was glimpsed by Theodoret, a fifth-century bishop of Cyrrhus: “that the human nature assumed from us should partake of the same honour as the one who assumed him, so that no difference in worship is apparent, so that the invisible Godhead is worshipped through the the visible human nature — this exceeds all wonder!”

In Christ, our humanity is lifted up from the depths of hell and Sheol and into the glory of heaven. Christ’s elevated glory is far above and beyond all principalities, sovereignties and powers, which are put under his feet.

In his honour Christ is given a name that is beyond human names, which cannot but fail to adequately describe his glory as he take his seat at the right hand of the Father. Christ has been made ‘head over all things for the Church, which is his body, the fullness of him who fills all in all.’

The Church, glorified, suffering and militant, has a destiny already prepared and waiting for its final fulfilment in the heavenly glory of Christ. St Paul in Romans 8 says, “I consider that the sufferings of this present time are not worth comparing with the glory that is to be revealed to us. For the creation waits with eager longing for the revealing of the sons of God.”

Our liturgy, the clouds of incense, music, singing and the devotion of our hearts need to be beautiful and lift us heavenward, that we might encounter the numinous and glimpse the glory of the divine. Not so that we are trapped gazing heavenward alone — the angels of God may have something to say about that. No: but that what we have seen, heard and encountered we might go and bear witness to in the world — continuing Christ’s mission as his body militant here on earth.

The world burns not because our gaze is fixed heavenward, but because of a lack of heavenly vision, prayer, faithfulness and our all-too-easy accommodation of worldly, rather than heavenly, values.

Robert Cardinal Sarah is quoted as saying, “We need priests who are men of the interior life, ‘God’s watchmen’, and pastors passionately committed to the evangelisation of the world, and not social workers or politicians.” What the cardinal has said of priests could as equally be said of the lay faithful.

We need those who are witnesses — in both word and deed — to the gospel of Christ in his cross, resurrection and ascension to heavenly glory.