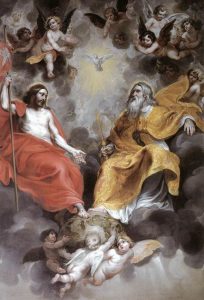 “Baptise them in the name of the Father and of the Son and of the Holy Spirit.”

It was with these words that we became Christians, as water was poured over our heads and the name of the Holy Trinity was professed, and we were thereby made part of the body of Christ.

At first it can sound so very simple, but the Trinity is one of those facts about Christianity that, as soon as we start to think about it, makes us deeply puzzled. We know that there is only one God. This is very firmly and clearly taught throughout the old and new testaments; our Jewish forefathers were vehemently monotheistic; we also learn this from philosophy which shows that the nature of God — what it means to be God — is unique, that there can only be one supreme being. But yet, here we have Christ clearly linking together the Father, the Son, and the Holy Ghost. Earlier in the passage, the disciples worshipped Our Lord — clearly acclaiming him as God. The maths simply doesn’t work.

Many attempts have been made to make sense of this doctrine — that there is one God, and that there are three Persons in God. The problem is that they usually fall into various errors and heresies. Various weird and wonderful names have been given to these theories which attempt to make three persons fit into one God — modalism, monarchianism, macedonianism. All of these ultimately fail because they see the Trinity as something to be solved, something to be understood. If we try to do this, then we try to fit God into our human perspective — we drag him down far below what he is, and if we do this, we rob him of his nature (which is far beyond our understanding). This does not mean that theological study of the Trinity is always bad or wrong, but that it needs to be undertaken realising that we will never fully grasp what’s actually going on there.

The Trinity is a mystery — and in Christian theology this word has a subtly different meaning to its common understanding. It means that we can never grasp the fullness of what the Trinity is and means, but that we have been told something about it in God’s revelation of himself — not least in that baptismal formula which S. Matthew relates to us. We can ponder and meditate on what it means, as long as we realise that we are never going to solve it; there will always be much deeper understandings…if and when we reach heaven, then the glory of this truth will still astound us, however much progress we make here on earth.

But today’s feast isn’t about an idea, however important that idea might be — it’s about a reality; it’s about the living and true God. Our Introit today, to take a perfect example, doesn’t start to pick apart what the Trinity means. It has already accepted through Faith what we know: that there is one God in three Persons; rather it sets out what the real purpose and mood of this feast should be. “Blessed be the Holy Trinity, and the undivided Unity: we will praise and glorify him.”

Today is a feast to celebrate the Trinity, to bless the Trinity, rather than an attempt to pretend that we can understand it fully.

We have been given a glimpse into God’s nature. He has shown us that whilst he is one and has perfect unity; he is also three, and the Father, the Son, and the Holy Ghost have always been in this unity of their relationship with each other. It is as this Trinity that we should worship God — everything which God has done, has been done by this Trinity. When God first created the world, it was the Holy Trinity which created; when God called Abraham, he visited him as three men; when God decided the redeem the world, those three Persons had perfect unity of will; at the Incarnation, following the mission of the Father, the Son became man, through the Holy Ghost’s overshadowing of Our Lady.

There are times when, quite properly, we focus on one Person — we have just celebrated an octave to honour the Holy Ghost and his descent on the Church, for example. But as we worship God, as we pray to God, as we ask for his grace in our life, we worship the Holy Trinity. We worship those three eternal and equal Persons, in their perfect and undivided unity.

This is not just some incidental fact about God either; it is his very nature. And it has great importance for us. That there are three Persons in God reveals something critical about God — that relationship is in his nature.

If we try to imagine a single God who is not a Trinity, it is difficult to conceive how we would relate to anybody else. The whole of creation would be so separate and different, surely he would be stuck in his uniqueness. But because God is Father, Son, and Holy Ghost there is a constant relationship between these three Persons. This means that in his very nature, God has relationships — that God’s very being itself is about showing love.

That relationship, that constant flow of love between the Father, the Son, and the Holy Ghost, was there in eternity before the world was brought into being. It is part of what God is. But that love, whilst it was perfect and whole in itself, wanted to create a universe so that there could be something which God could love. Creating humanity at the head of that creation was also an act of the same love. Redeeming that humanity when we fell away from God was also an act of the same love.

Today’s feast gives us an annual reminder of the nature of God. That God is one, he is unique, he is perfect and complete in himself; but he is also three, and that relationship is part of what he is. As we contemplate and prayerfully meditate on this Trinity, our first and most important response should always be one of wonder, one of worship. Blessed be the Holy Trinity, and the undivided Unity: we will praise and glorify him.

This was Fr Thomas’s final homily in Eastbourne prior to his moving to the Darlington Ordinariate Mission.