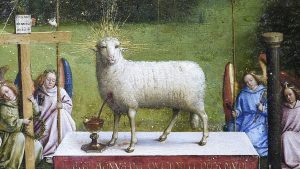 As they were eating, he took bread, and blessed, and broke it, and gave it to them, and said, “Take; this is my body.”

All the readings in mass today explore elements of the ritual sacrifice of Israel. The Exodus reading is the establishing of the Covenant and the reception of the law, after the Passover. The blood of the sacrifice is thrown over the people so that they might be received into the covenant with God. They were to be his people and he was to be their God.

The Last Supper sees Our Lord at the Passover, establishing a new covenant where he is the true Paschal Lamb who takes away the sin of the world. Moses and the old covenant could only be symbolic and prophetic of what was to come.

In Exodus 26, Moses was given detailed instructions about creating the tabernacle and Tent of Meeting. Moses is told that he must make the tabernacle as an exact earthly replica of the one he had seen in his vision of heaven. It contained three parts: the outer courtyard where the people of God would come to offer their sacrifices; the holy place, where the showbread, the Menorah, (seven branch candle stand) and the altar of incense were housed, (this holy place was accessible to the levitical priesthood only); and the final part, the Holy of Holies, which contained the Ark of the Covenant. This was entered once a year on the day of Atonement, by the High Priest alone. Aaron, the first High Priest, is a type of the One who would come. The high priest would take the blood of the sacrifice, sprinkle the mercy seat on the Ark of the Covenant for the corporal confession for all the sins of the People of God. He would wear a breastplate that held twelve stones to represent the twelve tribes that made up Israel. This earthly tabernacle was an icon of its true heavenly reality.

Thus this earthly representation of heavenly realities could only offer the blood of goats and bulls to cleanse the external, outward lives of God’s people, as our reading from Hebrews tells us. However, it could do nothing for what was the heart of the problem, the fall from grace and the loss of Eden.

This deeper spiritual problem of humanity’s loss of heavenly grace required a high priest who could enter the heavenly Holy of Holies. He would need to offer an acceptable blood sacrifice that could once and for all bring an eternal spiritual redemption, rather than a temporal earthly one.

Hebrews tells us that Christ is this new and eternal high priest, after Melchizedek of old. It is Christ who has mediated a new covenant by entering through the curtains of the heavenly Holy of Holies. He established an eternal salvation for all humanity, through a sacrifice, not of goats and bulls, but his own body and blood.

In Mark’s gospel we hear that ‘Jesus uttered a loud cry, and breathed his last. And the curtain of the temple, was torn in two, from top to bottom.’ That curtain that both Mark and Luke record in the Gospel is the curtain into the Holy of Holies and it is torn from top to bottom. It was a spiritual sign from heaven of what had been achieved through Christ in the eternal realm. This earthly representation was needed no longer, indeed the temple itself was within forty years to be utterly destroyed and to this day has not been rebuilt.

When many in the Church begin to lose sight and belief in the sacrifice of the mass and the Real Presence of Christ then we are in trouble. This is revealed in the lack of reverence by many in Christ’s sacramental presence and sadly the careless manner in which mass is often celebrated by priests. Where this is happening you will soon see a dying church and morally corrupt society that slowly disintegrates.

What we do in memory of Him is to pledge our lives to Him, to renew our promise to live by the words of His covenant and to be His servants.

There is no other return we can offer to Him for the eternal inheritance He has won for us. So let us approach the altar, calling upon His name in thanksgiving, taking up the greatest, unmerited gift imaginable, the Corpus Christi.