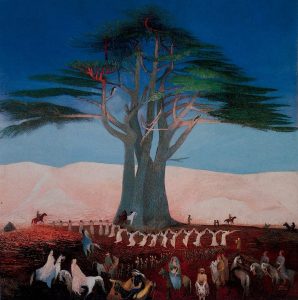 Fr Neil’s homily for the Second Sunday after Trinity, 13 June 2021

We are of courage … so whether we are at home or away, we make it our aim to please him.

In this verse¹, Paul is speaking of the desire to be ‘at home’ with the Lord in heavenly glory rather than in exile here in the body on earth. Yet he counsels courage in whatever state we are in, because of the hope of what is to be.

In doing so he recognises that there is a connection between the fullness of the Kingdom which is to come and the arena of the fallen world in which we live at the present.

It is an old heresy to see a stark opposition between the heavenly and earthly. Arianism is the father of varied heresies that fall into similar mistakes: Calvinism and the total depravity of the created order is one example, where in simple terms creation equals evil and spiritual realm equals good. This mistaken thinking led to two different excesses. The first was to deprive and punish the body to the extreme. The Puritans for example banished sport, theatre, alcohol, colourful garments and Christmas celebrations in an attempt to rid life of any joy. For if one was to experience joy in ‘worldly things’ it would feed the fallen flesh and thus must be a sin.

The opposite excess is to see the body as meaningless and only that which happens in the soul, in the spiritual realm, as being important. Therefore what we do with our bodies doesn’t matter. It is this sort of thinking that has feed our hedonistic culture. How popular it is to have a bit of benign spirituality, Buddhist meditation where good and evil are but an illusion, crystal mumbo-jumbo and magical well-being, without it having any element of moral challenge to the manner in which we live our lives.

A naïve reading of St Paul might charge him with a similar duality. However, a proper reading of Paul and an orthodox understanding of Christian revelation gives us an altogether different understanding. Christianity proclaims a resurrection of the body: in baptism we are regenerate and the final judgement shall see the renewal of heaven and earth. It is the vision of the created order — not done away with, but purged of evil, sin and death. In Christ heaven and earth, human and divine are reconciled.

This renewed created order of heavenly glory is anticipated in the outbreaking of the Kingdom of God. This Kingdom is like the boughs of the cedar under which many will find shelter, or a small mustard seed that will grow into a mighty shrub. There is an inevitability to the Kingdom of heaven coming into its full glory, for it is God-willed and not subject to the whims of man. The Church’s sacraments are a gift of God and a foretaste of what is yet to be fully manifest. Of course Paul longs to be at home with the Lord. As he says in 1 Corinthians², “For now we see in a mirror dimly, but then face to face. Now I know in part; then I shall understand fully, even as I have been fully understood.”

The beatific vision and the longing to see the fullness of the promised heavenly kingdom is the desire and hope of Paul’s heart that gives him courage to continue to walk by faith, while still in this body. This same desire should be ours every time we pray, “thy kingdom come, they will be done on earth as it is in heaven.” These words should reveal an appetite, a sense of longing and a desire to belong to the one who revealed his most sacred heart in his embracing the cross of our redemption.

Yet while still in this body there is an ongoing battle with sin and the dying to the fallen self with its passions. However, like Paul we are called to walk by faith and trust ourselves to the grace of God as we seek to follow his will in the manner in which we live our lives. The supernatural gifts of faith, hope and charity enable us to manifest within our own actions the fruits of the kingdom of God.

As Paul goes on to say in our reading from Corinthians there is the particular judgement that we will each face. We will each stand before the seat Christ took at his ascension and any judgement will be in accordance with what we have done in the body. We need only look at Christ’s own words in the story of the rich man and Lazarus³ and those of his response to the thief who ask that he might be remembered “when you come into your kingdom.”⁴ This judgement will lead to either rewards or punishment, heaven or hell.

Therefore we should have a healthy fear of the consequences of sin that separate us from God, and reflect on the decisions we make — either for divine charity or against it. However, what motivates us to “make it our aim to please him” should not be fear alone, but a movement of the heart. Yes, it is by faith that we are saved in response to the Passion and triumph of Christ on the cross over sin and death. Yet it is works of charity, in response to such divine love, that lead to our sanctification. It is the ongoing daily decision for Christ that lends us courage, despite the many voices telling us to walk another way.

Let our desire for the things of God be as the psalmist, who cries out: “As a deer longs for flowing streams, so longs my soul for you, O God. My soul thirsts for God, for the living God. When shall I come and behold the face of God?”⁵

Perhaps what we should fear is that, having once had our hearts captured by divine love in Christ, we might lose it.

The editorial title is taken from Psalm 69:36.