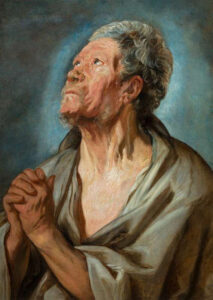 Fr Neil’s homily for the Seventeenth Sunday after Trinity, 26 September 2021

Whoever gives you a cup of water to drink because you bear the name of Christian, will by no means lose his reward.¹

The world, at the moment, is gripped by anxiety and fear about whatever the latest crisis is. If it’s not the terror of Covid-19, it is the Extinction Rebellion and the death of the created world as we know it. This fear and anxiety, excuse the pun, is fuelling the panic buying of petrol and diesel at the moment which becomes a self-fulfilling prophecy, as fuel disappears at a far quicker rate than normal.

Anger and rage are directed exclusively at the enemy out there somewhere. So many are on the alert for this enemy, which can be anyone who expresses an ‘unacceptable’ alternative opinion or even expresses a neutral or more nuanced opinion than expected. They are to be hunted down, ridiculed, condemned and destroyed as being guilty for all the problems of the world.

There are clear characteristics of the enemy that you can identify. They will not have red leathery skin, with horns, pointy tail and a pitchfork. For those who describe themselves as politically left-wing the enemy may be a person of colour who refuses to accept Critical Race theory or a person who upholds the importance of the family. For those who see themselves as on the right the enemy maybe be those who raise issues about racism, who want to see immigrants welcomed or who talk about families which differ from the traditional.

This external search for the one to blame may explain why an individual might be feeling disconnected, alone and lost. This is very dangerous, dividing and atomising society. It also gives legitimacy to those political leaders who are tempted by the power of tyranny. It has something of the French Revolution about it. Those who lead the rebellion and behead the oppressors, soon become the oppressors themselves who need beheading by a new set of liberators. “My ally and friend has become my enemy.”² It begins to consume itself.

The Church, of course, recognises that there are indeed external malignant powers. The devil and his legion of demons are evident in the spiritual realm and the conscious or unconscious actions of those who seek to undermine the family, marriage, and threaten the lives of the most vulnerable as being expendable.

However, the Church also lays great weight upon the individual’s internal struggle with evil. St Augustine of Hippo wrote:

Imagine the vanity of thinking that your enemy can do you more damage than your enmity.³

Our faith demands that we acknowledge that our own words and actions have damaged others as well as ourselves. While there may be others who seek me harm, my greatest enemy so often is myself. It is why Christ in today’s Gospel rather dramatically tells us spiritually to cut off our hand or foot and to pluck out our eye if it causes us to sin.

Perhaps instead of worrying about ‘who out there is my enemy’ we should make sure that we ourselves are leading lives worthy of our calling as disciples. Does the advice we give, or the example of our actions, give scandal — causing others to doubt or lose faith? Do we do what we do with mixed motives instead of seeking only the Father’s will? Are we living, as James in the epistle warns, for our own luxury and pleasure while neglecting our neighbours?

This recognition of death at work in us is part of our continual call to conversion. The Fall alienated us from God, which is death spiritually and emotionally. The Faith reveals the will of God that longs for us to walk the way of life, to the kingdom of Heaven in the Spirit of God.

Moses’ revealed desire in our first reading finds its fulfilment at Pentecost with the outpouring of the Spirit upon the apostles for the benefit of all God’s people:

But Moses said to him, “Are you jealous for my sake? Would that all the Lord‘s people were prophets, that the Lord would put his spirit upon them!⁴

To live influenced by the spirit of the age can never make us whole or satisfy our deepest desire. However, to walk in the Spirit of God is to long that, ‘thy kingdom come, thy will be done, on earth as it is in heaven.’ It transforms the simplest of actions directed to the Father’s will, so that even the giving of a cup of water can become a spiritual blessing and means of grace rather than a stumbling block for the innocent.

The abandonment of the self to the will of God is the essential first steps to the transformation of the world. Without it we inevitably remain a part of the problem.