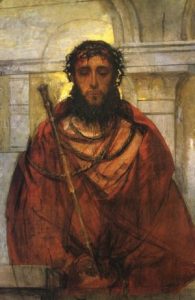 Fr Neil’s homily for the Twentieth Sunday after Trinity, 17 October 2021

For we have not a high priest who is unable to sympathise with our weaknesses, but one who in every respect has been tempted as we are, yet without sinning.¹

Generally in life, we understand that those who have a shared experience are more able to understand what others are going through. Hence those who have experienced the loss of a loved one understand better the landscape of bereavement. It is why there are support groups made of those with similar experience. The Parkinson’s Society, You Raise Me Up charity and cancer survivors groups are just some examples of such needed support.

The writer to the Hebrews is arguing that Christ the eternal High Priest was able to intercede for us because he shared in our humanity. He knows the temptations we face, the struggle that is ours each day, but does so without sin.

The word ‘tempted’ is a translation of the Greek word² that carries a more nuanced meaning than that which is usually understood. That meaning sees temptation in terms of trial or test. Much ink has been spilt on the translation of the Lord’s Prayer especially the line ‘lead us not into temptation.’ It would seem blatantly obvious that God does not maliciously set traps for us. The sense of the original might be ‘save us from the trial/test, but deliver us from evil.’

Indeed it might throw greater light on the words of Christ in the Garden of Gethsemane:

Then he said to them, “My soul is very sorrowful, even to death; remain here, and watch with me.” And going a little farther he fell on his face and prayed, “My Father, if it be possible, let this chalice pass from me; nevertheless, not as I will, but as you will.”³

This obviously carries more of an emphasis on the test or trial implying martyrdom, be that an actual death or a more spiritual one. However, this does not exclude — and indeed is related to — the trials and testing which we face every day to avoid sin.

The earthly high priest offers the sacrifices for the people and himself because he knows that he and they have, at times, failed the trial set before them and refused the chalice of self-sacrifice and martyrdom. Christ’s triumph is that he faced the same trials and yet did not turn back or refuse the path set before him, and was thus able to offer once for all the perfect sacrifice that takes away the sins of the world.

The temptation to sin, then, is understood as the refusal of the will of our Heavenly Father, who sets before us what we experience as the steep and rugged pathway; but it is a pathway that leads to life.

If we think about this for a moment then we can ask, Is there is any environment that nurtures life — causing it to flourish and grow — that doesn’t require the trial of self-sacrifice? Marriage, birth, education, friendship, jobs, care of the sick, the disabled and the dying, healthy communities and nation: all these things have to be marked by a sort of martyrdom if they are to work well.

I’d like to say that this is a self-evident truth and that pretty well any parent would understand the sacrifices that are made for the benefit of their children and loved ones. However, I am not so sure any more that this universal truth is as well known as it once was. The diminishing use of the terms of the trial of self-sacrifice and martyrdom has seen a growing refusal to accept this as necessary for a healthy life. The idea of sacrifice hasn’t disappeared but those who should make that sacrifice has. More and more it is no longer self-sacrifice and the need for internal transformation, as the problem is relocated from the internal spiritual and emotional self to its being predominantly a problem located in others — ‘them’. “They” are the unborn child, the disabled, the elderly, those with ‘unacceptable views’ which make others feel uncomfortable. These are now sacrificed so that the individual’s life might be happy, free and unencumbered of the responsibility of others. The consequences of this are the end of the Faith, our families and wider society as it crumbles into chaos.

This self-deceptive blindness is present in the request from the disciples John and James, to sit at the right and left side of Christ in his kingdom. They do not understand that Christ is referring to the “chalice” of his death upon the cross, and are motivated by selfish ambition. That ambition set the disciples at each other as they competed for the positions of power.

Christ insists to his disciples that self-surrender and not the thirst for power is the only way to life in the Kingdom:

Christ is the way, the truth and the life⁶. He has faced death and triumphed over it so we might not fear the call to follow him through the way of the cross and dying to self. Only then do we see his wondrous work as High Priest and perceive the gift of life he offers us in the sacrifice of the mass, which is eternal life.