This Friday we had various different “prayer stations” laid out for the children to investigate. Some were ones lent by Miss Seal from St Thomas a Beckett, that some of the children there had used to reflect on the Passion. Our children had three on the Last Supper (from the gospel for Palm Sunday) and the rest on aspects of the Passion. Each station had activities, colouring sheets and something to think about and respond to. This is post describes all of what the children did. Join them here and consider your own responses:

1. The Washing of the Feet. 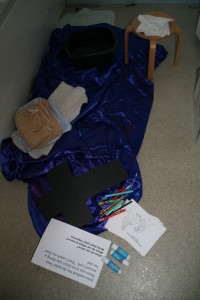 In the bathroom, there was a bowl of water and towels. Children took turns in washing each other’s feet and then talked about the thoughts and questions left out for them:

Jesus washed the disciples’ feet.
Peter was cross Jesus was doing a servant’s job. Don’t wash my feet he said.
When do we serve? When do we refuse to serve?

Here are some of their responses:
I serve when I…help friends when they fall over…doing the washing up 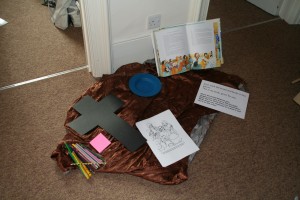 With bread laid out on a plate that they were “allowed to eat for real life” and pictures of the last supper the children thought about this:
Jesus took the bread and broke it into pieces.This is my body, given for you.
Share the bread between you. Imagine you were one of the disciples. What did you think when you heard this?

Thoughts were written on post-it notes and put on a cross:
I would be puzzled because I would think ‘what is he saying? Why is he doing this?’
I thought it was very interesting and brave to do that. I would have been confused but taken it for Jesus.
Worried…scared…staying sad…confused, surprised. 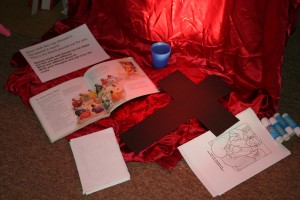 Opposite the bread was a cup (with blackcurrant juice) for them to share.
Jesus took the cup, blessed it. He passed it round.This is my blood poured out for you.
Some meals with friends are happy but this one was different. What was different about it?

Thoughts again went on the cross.
This was his preparation for his death….It was his blood…because Jesus was going to die…It was different because it was Jesus’ last meal with his disciples. 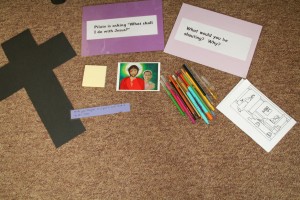 With colouring sheets and a picture of Jesus and Pilate, were these things to think about: Pilate is asking “What shall I do with Jesus?” What would you be shouting?

Some of the children wrote:

I would say “Let him go”…I would be shouting “Save him” because he is God….Help him…I might shout what other people will shout but I will, in my heart, wish for him to be set free…I would be saying if I were Pilate “Why should we do this to Jesus?”

5. The women of Jerusalem crying. 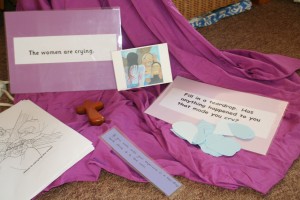 The women are crying. The children were invited to write, on teardrops, the things that made them sad. 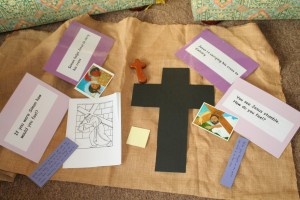 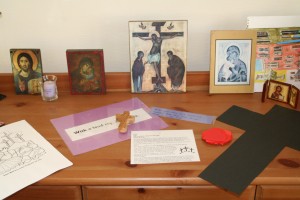 A scripture passage about Jesus’ death helped the children think about this part of the story. Hearts were left by the side of a cross, so that they could write down their own names to help them remember that Jesus’ death was for each one of them.

8. Taken down and placed in the tomb. 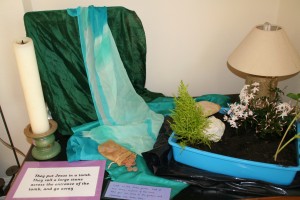 At this final prayer station, the children places a glass pebble in an Easter garden, with a closed ‘tomb’ in the corner.

Once everyone had had a chance to spend time at each place, we gathered together for a final meditation. We all sat around a poster of Sieger Koder’s Last Supper that we used a couple of weeks ago. To begin with we looked closely to see what we noticed. The reflection in the ‘Communion with Christ’ materials summed up all the aspects we had looked at during our Lent course. Around the poster we placed statements that reminded us of what we had leant about the Mass in each week:

We say sorry for the things we have done wrong. We put it right by doing penance.
We listen to the story of God’s love for us.
We know we are part of God’s large family, part of the Body of Christ.
We take what we have discovered in the mass, out to the world and live it in our lives.

The session ended with the praying of the Anima Christi.

(Thank you once again to Miss Seal, whose “Jesus’ walk of Love” materials helped with this session.)