One of the things that hit me in Lourdes was the diversity of the Catholic Church. As we walked around the grotto for the first time, we ran our fingers along the rock. It has been worn smooth by millions of fingertips, all doing what we were doing. Our fingers, the fingers of past pilgrims polishing the hard rock smooth. United in such a simple action.

Sometimes people see the Church as a homogenous whole and yet a trip to Lourdes reminds me that the Catholic Church encompasses a huge variety of cultures, ages, abilities, traditions, languages, genders and backgrounds. Just to name a few.

I am aware that a large part of last year was spent building our own, small group. This was a necessity. Some people knew only a few people- or none at all- in the group. It wasn’t until the first meeting that we were sure of who would be there and there was quite a bit of surprise in some quarters. We were also aware that we each of us had a specific sense of calling and that this fed into what we, as a group were called to do. As time progressed and relationships developed we also became aware of how we related to the wider Ordinariate. Mgr Keith Newton’s visit, the trip to Rome and the Chrism service in Holy week has all helped make us think about how our group fits into the Ordinariate we are part of, here in the UK. Our small group, in its mission and work is fulfilling the mission of the Ordinary in this place.

Along side this we have been working with the Diocesan parish. Priests and people alike in Eastbourne have been very supportive of us and there is an ongoing developing relationship there.

When in Lourdes I had my horizons widened further. We are part of something that is huge. Sometimes it is easy to focus only on what goes on around us, to feel that we, in our small group are fighting an uphill battle. As I became aware that God does things in the life of individuals, all over the world, I also became aware that those individuals form part of this community of believers that stretches around the World. God works at the personal and individual level and on the scale of the whole world.

Some of this dynamic had been talked about over Lent, when we looked at the Communion of Saints. In Lourdes I began to see how huge the Church Militant- here on Earth- is today.

I was most aware of this, not only in the grotto, but also on Tuesday night when we took part in the torchlight procession. Thousands of people, many from HCPT all walking and praying together. The prayers were all done in several languages. I can almost manage the French and Spanish “Hail Mary”, alongside the English.I’m better now than at the start of the procession! Here we were all together, praying the same prayers together, different languages, united. 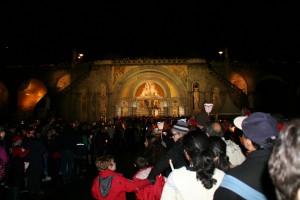 As our prayers join together, I reflect on the work of the Holy Spirit. Early beginnings in a garden on Easter Sunday, a handful of scared disciples leads today to the Gospel being taken to every country. At Lourdes you see it because people come, in groups or on their own to pray in this Holy Place. The candlelight illuminated both the diversity and the unity which makes the Catholic Church what it is.