On our first full day in Lourdes we took the bus up to the Cite Saint-Pierre. Also known as the City of the Poor, it is a place where accommodation and hospitality is offered to those pilgrims who cannot afford to stay in hotels. The cite is set above the main part of Lourdes, on a steep mountainside. It was pouring with rain on our afternoon visit and most people got very wet. 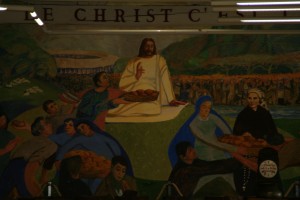 Neil celebrated mass in the Sheep Fold chapel. This is a thatched barn similar to the ones where sheep are kept.

Being here, I reflected on Bernadette’s background. Her family lived in great poverty for much of her childhood. On the day she had her first vision she was out with two friends, collecting firewood. As we sat in damp clothes, with the wind and rain being heard outside, I thought how necessary a warm fire would have been for a large family, living in the room at the Cachot. Weather in the mountains (as we discovered) is very changeable and I guess it would have been miserable without firewood on a damp and cold day.

Bernadette’s visions were questioned by some because of her background. She was seen as a simple peasant. And yet God used her in incredible ways. Our Lady was also from a humble background, yet God used her to bring about the Incarnation.

Later on in Bernadette’s life, she accepted poverty as a nun at Nevers. Since the very beginning of the church, from the first days after Jesus’ accension, the disciples shared what they had. When St Paul describes the Last Supper it is to remind those at Corinth that they should share what they have with poorer believers. Instead of having mass the believers at Corinth had a big meal to follow Jesus’ commandment to ‘do this in memory of me’. Or at least the meal was big for those who could afford to bring lots of food. Jesus’ act of self giving, celebrated in the mass, had become a bun fight at Corinth, where poorer believers were shut out or left embrassed.

How far do we in the West do this? How much do I share whatever I have with those who are poorer? How much do I embrace the simpler life that Jesus had, that Paul and Peter had, that St Francis, St Ignatius or St Bernadette embraced? God emptied himself in order to come to be with those he loved, living among the poor and despised, dying a shameful death. This self giving is what staff and volunteers at the City of the Poor offer, allowing  all to come to Lourdes, whatever their circumstances. Of course this is also what HCPT does too, by providing places for children of different abilities and circumstances to come and encounter the God who lived with those whom the powerful and rich looked down on. These two organisiations live out this self giving love that Jesus demonstrated through his life on Earth and through his saints since.

Having sat in the Sheep Fold chapel, I am aware the I too have to find ways of living this out, day to day in my own life.